Can a son succeed his father and become the next “Living Imam” (or Hazar Imam) if the son predeceases the father? If not, then those who call themselves as Shia Ismailis have to think harder before calling themselves the followers of Imam Ismail who did not live long enough to become the next Hazar Imam.

Here is proof from History of the Arabs from the Earliest Times to the Present by Philip K. Hitti who was Professor Emeritus of Semitic Literature at Princeton University. Professor Hitti spent 10 years researching and writing this book. John R. Starkey writes in his article A Talk with Philip Hitti:

History of the Arabs, first published in 1937 and now going into its tenth edition, is probably the single most important book ever published in America on the subject of Arabs. “There is no comparable book on the subject,” an Arab historian in Beirut said recently. “On the Arabs alone, nothing in the West since 1937 has matched Hitti’s contribution.” 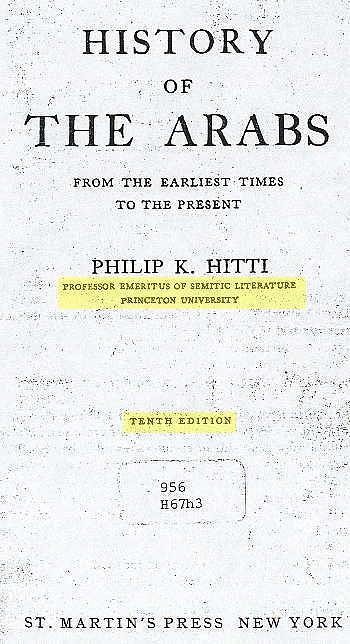 The author has quoted below the works of three well-known historians as the source. 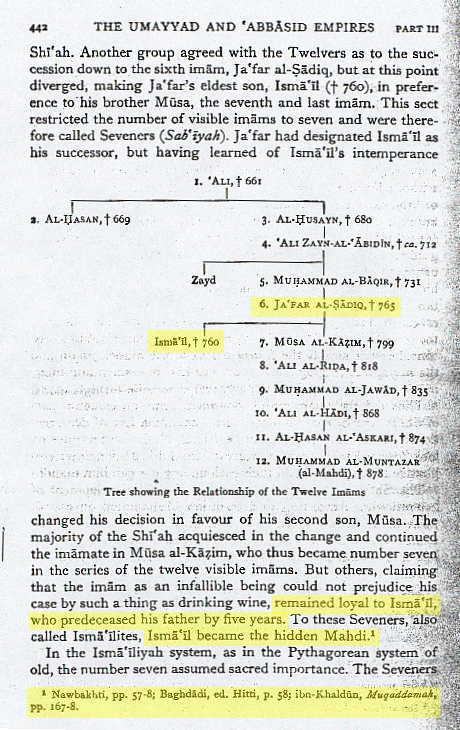 The Ismailis: Their History and Doctrines by Farhad Daftary

The Ismailis: Their History and Doctrines, published by Cambridge University Press, 1990 is an acclaimed book by Dr. Farhad Daftary. Dr. Daftary is a world-renowned authority on Ismaili Studies, and is the Head of the Department of Academic Research & Publications at the Institute of Ismaili Studies in London, England and spent several years for completing this classical work of Ismaili history. The Persian translation of this book has been awarded the “Best Book of the Year Award” in Iran in 1996. This publication is also available in most of the major public libraries of the world and is sold in the major Ismaili Jamaat Khanas, around the world.  has read the typescript of this book. In the foreword of this book, Professor Wilferd Madelung of the University of Oxford writes: “Dr. Daftary offers a first comprehensive and detailed synthesis of the complex history of Ismailism.”

In the genealogical flow chart which is illustrated in this book on page 551, it is noticeable that the fifth Imam Ja’far al-Sadiq died in 148 Hijri/765 AD. His son Ismail al-Mubarak had died in around 136 Hijri/754 AD., that is to say nearly 11 years before the death of his father. To assert, after having known these dates, that Ismail who had died earlier than his father succeeded Ja’far al-Sadiq would be a folly of the highest degree. I have received mails from the Agakhani Ismailis informing me that the year shown for the death of Imam Ismail, by Dr. Daftary in his genealogical chart, is the year in which a mock funeral procession of Ismail was taken out in Medina by his father. That was a mere rush. 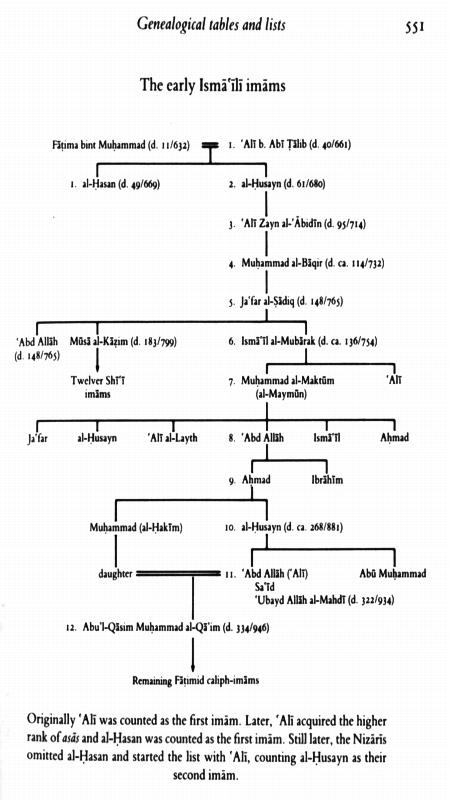 A Short History of the Ismailis by Farhad Daftary

In reality, Imam Ja’far al-Sadiq had sent his son Ismail away to an unknown location because there was a threat to his life from enemies. It is noteworthy that the flow chart published in a later date publication of Dr. Daftary entitled; ‘A Short History Of The Ismailis’ (1998), the dates have not been amended and the fact that Ismail died eleven years before his father is repeated. Furthermore, so as to reconfirm the fact that it was a legitimate funeral of his dead son, on page 34 of this book it is mentioned that during Ismail’s funeral procession in Medina the face of Ismail was shown to the witnesses by his father al-Sadiq. Little later, it is mentioned that an Indian Ismaili author Al-Bharuchi relates visiting Ismail’s tomb in the Baqi cemetery in Medina in 1498 and his grave still existed there in 1885, but it was later destroyed by the Wahhabis along with the graves of his father and other imams located in that cemetery. The bibliographical notes to the above reads: Hasan b. Nuh al-Bharuchi, Kitab al-azhar, in ‘Adil al-’Awwa (ed.), Muntakhabat Isma’iliyya (Damascus, 1958), pp. 234-5.

Until and unless Dr. Farhad Daftary admits there are errors in his chart and circulates the revised dates, the possibilities for which are highly unlikely, Musa al-Kazim’s legitimate claim to the Imamat, who died in 183 Hijri/799 AD, appears to be well-founded and genuinely compelling.

This is the very reason that more than 98% of Shia Muslims do not recognize Ismail as their Imam, but recognize Musa al-Kazim. Only less than 2% call themselves Ismaili and claim to follow ‘Imam’ Ismail who never lived long enough to become an Imam himself.