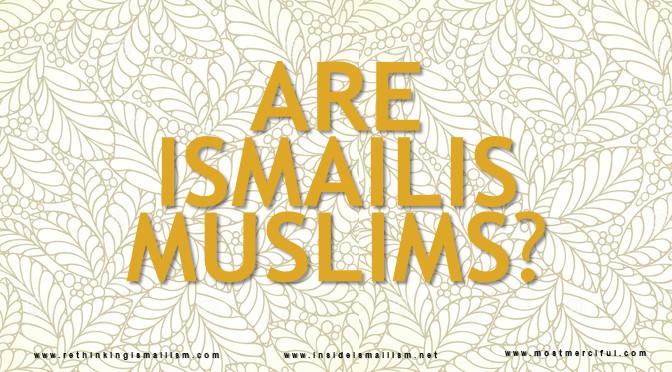 Some say that anyone who testifies – says the kalimah ‘lā ilāha illā -llāh, muḥammadur rasūlu -llāh (There is none worthy of obedience and worship except Allāh and Muhammad is the final Messenger of Allāh), makes them a Muslim and we have no right to question that.

Sincerity, however, is subject to proof.

First of all, Islam is the religion prescribed by Allāh for the whole of mankind. That means, it is to be accessible to all. That is why there is no part of a masjid where secret rituals are performed and from which any Muslim is excluded. Even non-Muslims are able to attend and observe. Ismailis, on the other hand, have a closed-door policy. Even within themselves –  several separate gatherings (majalis) are held from which other Ismailis, who are disqualified and excluded from attending on the grounds that they have not paid the requisite fee for attending that particular majlis.

Outsiders may reserve judgment on the grounds that they do not know enough about Ismāʿīlism because of that ‘closed-door’ policy. Those constraints, however, cannot apply to those who have knowledge of Ismāʿīlism, as well as Islam.   Allāh chose the name of His deen as Islam; He defined it and called those who follow it – Muslims – in the Qurʾān.

The Prophet (sallallhu alahi wa salam) (peace be upon him) summarized it for us in two clear criteria. On one he said – Imaan (faith) is:

That you affirm your faith in Allāh, His angels, His books, His meeting, His messengers and that you believe in Destiny.

He also said that Islam is based on 5 principles (pillars):

Does the Ismaili Kalima- where they add a third part “Amirul Momin Ali ul Allāh” (Ali, the Commander of the believers is of Allāh) take them outside Islam? By itself –  No! as other Shias do so, too.

However, their greeting – “Ya Ali Madad”  (‘O Ali help me’) and their supplications to “Ali” and “the Imam” – which they interchangeably use to supplicate to the Aga Khan, prove without a doubt, that they do not subscribe to that part of the Kalimah “that none has the right to be worshipped except Allāh.” Here they contradict themselves too, as they recite in their Holy Du’a, “You alone (Allāh) we worship and from you alone we seek help”!

In one of the Hymn (also called ‘ginans’) recited in the Jamatkhanas, they even sing to the Aga Khan:

Translation: “You are the Truth, you are the Holy, O Lord (King)”

These attributes of Truth and Holy ( Haqq and Quddus in Arabic) belong to Allāh and Him alone. However, Ismailis attribute these to Aga Khan.

The Aga Khan, has also the title “Mazhar of Allāh” meaning he is the “Shadow of Allāh” on earth. I leave it to you to decide that how can Allāh, who has no percieveable shape or form, have a light shining upon Him to form a shadow  on this Earth and what proof is there in Aga Khan’s claim that he is that shadow?

As far as salat is concerned, Ismailis try to put a smoke screen saying that their Dua’ is like  Namaaz – salat  by saying that we do sujud and they quote  Surat Al Fatiha, al-Ikhlas and few other verses from the Quran in their Holy Dua.

However, the format of salat has been with us from the Prophet’s (pbuh) times in which Muslims do qiyam, ruku, sujud, recite durud, face the qiblah and these are absent from the Ismaili 3 (instead of 5 daily Muslim) prayers . Incidentally, the way the Ismailis sit, it is not possible even to do a proper sujud.

Ismailis do not pay Zakat.  Instead, the Aga Khan claims Dasond – Tithe – 10 percent of one’s income regardless whether that income is sufficient or insufficient for one’s needs!

In case of Khoja Ismailis, he also claims an additional ‘two and half per cent’ contributions because he has given himself the role of a pir or dai. Then there are those Ismailis who belong to Mubarak Majalis (Gathering of the Blessed) they are required to give 25 percent of all their income, including personal allowance. So for example if the wife elects to join, and the husband who has given 12.5% on his income and gave $ 500 as personal allowance to his wife, she would pay $125 as Dasond and say on Eid or Birthdays children and husband gave Money and clothes ( purchased from monies left after already having paid their 12.5%) amounting to $200, she would be obliged to pay an additional $50!

The actual Islamic Zakat as prescribed by the Quran, is payable on “surplus wealth” i.e. excluding necessities such as home for residing in and a vehicle for transport held for 12 months at 2.5% only which means that poor people are exempted from paying and the monies collected are to be spent on those qualified e.g. poor, widows, etc. as specified in the Qurʾān.

By tradition, the Prophet and members of the household are specifically excluded from receiving any part of Zakat Funds. They were paid from Bayt-ul-Maal from voluntary donations towards building/running of Mosques and communal administration.  It is strange that Aga Khan claims to be from the household of the Prophet and still collects an inflated Zakat, called Dasond.

Hajj is neither compulsory, not encouraged in Ismailism. Instead, Ismailis believe that the glimpse of Aga Khan is equal to that of a Hajj. Every Ismaili should look at the Aga Khan (or perform a deedar) at least once in a lifetime.

Fasting is not obligatory and at times eating (sukhreet) and drinking of holy water – Niyaz which are part of the rituals on Fridays and certain Majalis (congregations  additional to daily religious rituals are performed)  take place during the time of fasting!

So we see from the forgoing that if a litmus test (which the Qurʾān and Hadith) provide is applied, Ismailism fails on several core areas.

There is one further point I would like to make. Allāh completed and perfected the deen of Islam and gave no one the authority to change it.

Interestingly, the late Aga Khan in his memoirs, states:

“What has been my own policy with the followers? Our religion is our religion; you either believe in it or you do not. You can leave a faith but you cannot, if you do not accept its tenets, remain with it and claim to ‘reform it’. You can abandon those tenets, but you cannot try to change them and still protest that you belong to the particular sect that holds them.”

Yet he can change the doctrine, rites and rituals of Islam and still claim to be a Muslim! This is a strange logic and sense of integrity which would befuddle any ordinary mortal!

To be truthful, logic and rationality are sorely lacking in Ismaili rituals. For example they recite the Salwat: “Allahumma Salli ala Muhammad in wa ale ala Muhammad”  during Jamati supplication (Giriyazari Tasbih). So they beseech Allāh to bestow His peace upon Prophet Muhammad and his progeny (descendents) (followers) but then conclude by saying, “Ya Ali Ya Nur Mowlana Shah Karim Al Husseini tun salwatji tasbih toje hazur pur mein kabool kar” – ( O Ali, O Light of our Lord Shah Karim Al Husseini accept our supplication)!

In my opinion, by the criteria of the Ismaili Imam himself, they disqualify themselves from belonging to the Muslim Ummah.

5 thoughts on “Are Ismailis Muslims?”