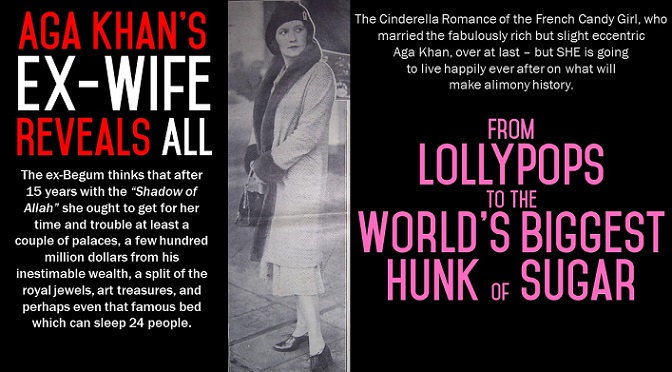 Credit: The below has been taken from the article “From Lollypops to the World’s Biggest Hunk of Sugar” which appeared in the November 28, 1943 edition of “The American Weekly” and is reported on by Lowell Morrill. The original article can be found here and is only reproduced below for ease of reading. 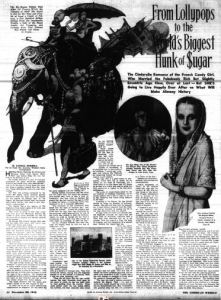 The Indian potentate – s sort of man-god worshiped by some 80,000,000 fanatical Moslems and worth more than $800,000,000 was cut in the face by flying glass the other day when a bomber crashed into the Alps, near Vevey, Switzerland, where he was vacationing.

But that we nothing compared to the wound the Aga’s vanity received shortly afterward when the High Court of Geneva cut the marital tie binding him to the Begum, his beautiful French wife, the former Jane-Andree Carron, who used to sell lollypops in a sweets shop.

The Begum has a low opinion of His Highness which doesn’t agree at all with that of his infatuated followers.

They think so much of him that very year they give the 265-pound divinity his wright in gold – almost $150,000 as well as the revenues of temples and shrines erected to his worship.

As though this weren’t enough they also buy his waste bath water, with which they anoint their brows and bodies.

In 1945, on his Silver Jubilee as “Supreme Reason” and “Proprietor of Time and Existence” his followers intend giving him his wright in diamonds. Since he wrighs approximately 500,000 carats,a stone that size would be 170 times the size of Cullinan, largest in the world. Anyhow, he expects a batch of diamonds worth at least $25,000,000, which ain’t hay.

This half-divine monarch has had a pretty divine time all his life. He has two palaces in India, the Aga Hall in Bombay and the Yerowda Palace at Poona, which are even more perfect than “Shangri La”. They are filed with gold-encrusted plate and begemmed furniture, and Aga Hall boasts a bed which will sleep 24 persons. There is a long staircase approaching it, but its practical domestic use is a matter of guesswork.

The Aga is also known as “The Invisible Presence” a good name because he is rarely in India, whose climate he dislikes.

One measure of his “invisibility” occurred after he decided to shed his first wife. This was long ago in India when he began to have the urge to be a playboy. He vanished so completely as the woman’s husband, that even her name is now forgotten and the divorce was wholly erased from Indian history.

His lately divorced wife, the candy girl, doesn’t intend to let that happen to her.

In order not to let the Aga’s matrimonial misadventure be forgotten, the day after the divorce, the Begum celebrated her liberty by inviting friends to tea party designed just for “telling all”.

Having blithely announced that she could now live apart from the object she detested, Jane-Andree said “love is only a brief intoxication,” then she tried to convince her guests that she had married the Aga in order to please her father, a restaurant owner, who happened to be in financial difficulties.

“The brilliancy of the honeymoon soon faded into the light of common day,” continued the hostess. “I took his measure and found that the Aga, who was intoxicated by his greatness, really believed that the rest of the world was created to dust his furniture.  Indeed, he acted as though the sun were a mechanical lamp, which was kind enough to wind itself up purposely to light his way.”

As the company tittered over their tea-cups, the Begum went on with her tale of resplendent woe.

“The Aga Khan claims to be descended from Ali, the son-in-law of the Prophet Mohammed, but from the way he menaced and maltreated me, I am inclined to harken to those historians who trace his origin to the notorious Old Man of the Mountain, Hassan Sabbah, the dreaded founder of the Assassins Order.”

“Outwardly,” said Jane-Andree, “we exhibited such marks of tenderness that people considered us a pattern of conjugal bliss. They even envied our felicity, saying that His Highness seemed to be the fondest of husbands, while I was the most endearing wife.

“They did not know that the Aga – madly jealous like most Orientals – hired spies by the score to watch me day and night when he went gadding about the country. These pests peered under the bed, looked behind the curtains, and kept especially close watch on my dancing partner, which greatly exasperated me.”

“Such stupid jealousy hurt me, for the idea of deceiving the Aga had never occurred to me, and on his return I would look at him with all the reproach the human eye is capable of expressing. If he pretended that he had proofs of my infidelity, I would wax indignant, and upgraid His Highness for conducting himself as though wedlock meant padlock.”

“The Aga, who was a great dealer in compliment, would then try to pacify me by calling me the Rose of Perfection, but I never failed to let him know that NO thorns go as deep as a rose’s, and used to prick him with reproaches in regard to his bare-faced faithlessness.”

“As a rule, he would finally admit he was not overfond of resisting temptation, yet he always insisted that I had no right to act as he did, declaring this would bring dishonor on his head.”

According to the Begum, the Aga plumed himself on being the greatest of petticoat-chasers. She affirmed that after he espoused her, it soon became apparent that His Highness had no intention of passing his life in one long tete-a-tete with his consort.

No made made love with more success than His Highness, although the Aga’s face and figure were so eminently ludicrous that a Paris wag once described him as a “fat frog with the eyes of a frog, the teeth of a beaver, and the complexion of a smoked ham.” Nobody has topped that yet.

While his followers in the Far East mystically invoke him as the “The Repository of the Universal Soul”, the profane in Europe give him the nickname of “The Universal Lover”.

The Aga lavished wealth on the loveliest women, loading them with precious stones, replenishing their wardrobes, paying their rent, or sharing with them his winnings at the gaming tables.

Aga Khan III leaving Casino Deauville with one of his later wives, Yvonne Blanche Labrousse who was crowned Miss Lyon and later Miss France in 1930.

Games of hazard, as well as business, dissipated much of the Aga’s time and gold. Jane said that although the Koran prohibits gambling, this so-called descendant of the Prophet was a law unto himself – a demigod strutting about the casinos at Cannes and Monte Carlo.

“The Aga was such as reckless gamester,” declared the Begum, “that I am sure he would have staked me, and my jewels at play, like the Mahabharata hero, King Yudhishthir, who gambled away his wife and possessions on a throw of the dice.”

Casinos and courtezans, however, were not his only preoccupations.

This “Proprietor of Time”, as his voraries called him, was also the owner of the finest race horses in the world. The Prophet Mohammed was no prouder of the fleet Al Borak that bore him to Paradise than the Aga was of his favorite, Blenheim, winner of the Derby in England.

“I wanted to wear white at my wedding,” exclaimed the former candy girl, “but he Aga, who evidently thought more of his fillies than his fiancee, compelled me to put on a dress of green and brown, the colors of his stables.”

“One of the reasons why I filed suit for divorce,” continued Jane-Andree, “was because Aga brought up our eleven-year-old child, Prince Sadri, as if he intended to make him a jockey.”

Among other reasons that led to the sundering of the nuptial ties may be mentioned the Aga’s fatuous vanity.

“My ex-husband bragged of the lions he killed in Kenya, of the hearts he had won, of his extraordinary luck at roulette and baccarat.

“What heroic efforts I made to keep awake whenever he told me about his ancestors, his travels, his treasures, his triumphs, his trotters, and the tidy sums he made by the sale of his bottled bath-water.

“Now I can consume the residue of my days in peace,” she cried. “I shall not be obliged to wear out life with altercations. To tell the truth, I am lucky to be alive, for my paunchy ex-spouse, imbued with Oriental notions and descended from the founder of the Assassins Order, was quite capable of getting rid of me as the late Maharaja of Patiala got rid of his self-willed and superfluous wives.”

While the disenchanted Jane-Andree was exercising her corrosive wit upon her former mate, His Highness was being interviewed by journalists as his villa in St. Moritz. Asked what he thought of the candy girl, the “Possessor of Heavenly Wisdom” assumed the attitude of a tragedy hero, and, blowing like a long-traveled porpoise, replied:

“Man is born to misfortune, and it is but fit that I should have a share. My worshipers in Syria, Iraq, Iran, Turkestan, India, Malaya, Zanzibar, and Madagascar have for years invoked me by the name of “The Shadow of Allah”, but ever since I married that ‘image of frivolity’ I met in a candy store at Chambery, they have called me a fool.

“I put up with her whims and pranks, I was never remiss in my conjugal dities, and I rarely pried into her secrets. But how can a man occupy and amuse a woman forever? Today I am as sick of her as she is weary of me. We came together in the illusion of love and clasped hatred within our joined arms. Of all the serious things in the world, marriage is the absurdest. How much better off would I have been today, and how much hapier, if I had bought a doll at the bazaar instead of wedding this frivolously-minded French girl!”

Here it might be stated that Jane-Andree is not the only wife the Aga has divorced.

Years ago, he got rid of his first consort so that he could marry an Italian high-kicker named Theresa Mangioni. The danseuse died in 1926, leaving him a son, Prince Ali Khan – his heir, who is now married to a divorcee, daughter of Lord Churston, and formerly the wife of Loel-Guinness, son of Benjamin Guinness, the Irish “Beer Baron”.

8 thoughts on “Aga Khan’s Ex-Wife Reveals All of His Secrets: From Lollypops to the World’s Biggest Hunk of Sugar”