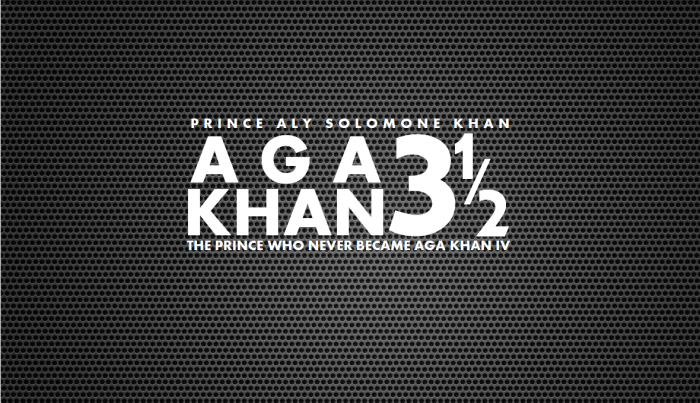 For many years, Ismailis have devised and followed a certain criteria for designating the living Imam (or Hazar Imam). These criteria have not only been followed throughout their history, but are also taught to all Ismailis.

In this article we will look at the principles of Nizari Ismaili Imamate over the centuries, birth and background Aly S. Khan as described by his father Aga Khan III, appointment of Aly S. Khan as successor by Aga Khan III, contradiction in Aga Khan III’s will, rejection of Karim Aga Khan by the Ismaili community, and the question which looms Ismaili leadership to this day: “Was Aly S. Khan planning to come out clean?”.

4. Contradiction in Aga Khan III’s Will

5. Ismailis’ Rejection of, and Revolt Against Karim Aga Khan

6. Was Aly S. Khan Planning to Come Out Clean?

Let’s examine all of the above:

The established criteria for the nizari Ismaili Imamate are as follows:

a. The world cannot exist without an Imam and that there has to be an Imam on the face of this Earth;

b. There can be only one true Imam at any given period of time;

c. This person leads as true Imam as long as he lives;

d. This living Imam has the sole authority to designate his successor;

e. Under normal circumstances, this successor should be from one of his sons, which is usually the eldest son;

f. The person designated as the next Imam can only be enthroned to the seat of Imamat, after the death of the previous Imam.

Here are the historical records to substantiate the above:

Aga Khan II: He succeeded his father when he was fifty, only to die four years later from pneumonia caught when out shooting

In 1817, Khalilullah Ali – the 45th Imam of the Ismailis and the father of the Aga Khan I, was murdered in Iran. After Khalilullah Ali, his son Hasan Ali became the 46th Imam. Hasan Ali died on 12th April 1881 in Bombay, India.

Karim Aga Khan’s appointment was unexpected as Sultan Muhammad Shah, Aga Khan III in the late years of his life had sent his son Aly S. Khan on various visits to Jamaats around the world and had clearly pronounced him as his successor.

The Aga Khan was married first in 1898 to the daughter of his uncle, Aga Jangishah. In 1908, Aga Khan III lost his heart to a pubescent teenage ballerina “Ginetta” (real name Theresa Magliano), during his visit to France. In his Memoirs published in 1954, Aga Khan III writes (p. 104):

From 1907 onwards I visited Europe every year. I had lost my heart to the French Riviera. Now in my maturity my affection for it had deepened and ripened, and I found myself returning to it again and again. In 1908 this affection found a personal focus. I made the acquaintance of Mlle. Theresa Magliano, one of the most promising young dancers of the Ballet Opera of Monte Carlo, a ballerina… She was then just nineteen… In the spring of that year she accompanied me to Egypt and we were married in Cairo in accordance with Muslim law.

Three years after the publication of his Memoirs, Aga Khan signed his will. We find an interesting version of “the muta form of marriage” in that document (p. 4):

In the year One thousand nine hundred and eight I was married to CLEOPE TERESA MAGLIANO according to the Muta form of marriage. On the twenty-third day of January One thousand nine hundred and twenty-three I went through the permanent form of marriage with my said wife CLEOPE TERESA MAGLIANO in Bombay observing the ceremonials which are customary among Shia Moslems.

Having insisted in his Memoirs published just before his death, that he had married Mlle. Magliano “in accordance with the Muslim law” the Aga Khan shortly afterwards in his Will admitted that in fact he was married to her “according to the muta form of marriage” and that fifteen years later he “went through the permanent form of marriage,” in Bombay.

Although some Muslim writers (among them Mr. Asaf A. A. Fyzee, writing in the Aga Khan Diamond Jubilee Souvenir Book, 1945) have claimed that “mut’a (temporary marriage) is, according to Ismaili Law, altogether unlawful…” the Aga Khan himself, supreme arbiter of Ismaili religious practices, obviously did not concur because he mentioned in his will that he had married his second wife “by mut’a marriage”.

A marriage stipulated to be temporary, sometimes called a “marriage of pleasure.” The marriage is automatically terminated at the end of the agreed period.

Out of this temporary marriage, two sons were born within a period of three years. The first son was named Giussepe Mahdi Khan, who died in February 1911. The second son, named Aly S. Khan, was born in Turin, Italy, on 13 June 1911. Aly Khan’s birth certificate describes his mother as “Teresa Magliano, unmarried 22 years old, living on independent means,” and his father as “His Highness The Aga Khan, son of the late Aga Ali Shah.”

In August 1930, Aga Khan III sent Prince Aly Khan to visit Syrian Ismailis. He also dispatched a special Farman to his Syrian Jama’at. This Farman was recorded by A. J. Chunara, the author of Noorum-Mubin. (p. 531), which reads:

“We are sending our son to you. Consider his arrival as my arrival. We are appointing our Prince as our wali ahad, meaning the successor to our throne.”

To commemorate this occasion, a darbar (royal pageant) was held in Salamiyya. The governor of Salamiyya read Aga Khan’s Holy Farman. Thereafter, members of the Syrian Jama`at took the bay’ ah (oath of allegiance) at the hand of the future Imam and offered him nazrana (or gifts). During this visit to Syria, Aly Khan rode an Arabian horse and wore an Arab dress. A photograph of this appears in Noorum-Mubin (p. 530) with the following caption in English:

H.S.H. Prince Aly S. Khan heir apparent to Mowlana Hazar Imam, in the Arab costumes of his forefathers, during his visit to Syria.

Ismailis of India, Africa, and Burma celebrated this appointment of Prince Aly with special majalis and melawadas. A deputation of Ismaili leaders presented Peramini (special gifts) to Lady Ali Shah at her bungalow in Valkesh’war, Bombay, records Noorum-Mubin, p. 532.

In our Mission Class, we were told by the senior missionaries that Prince Aly the future forty-ninth Imam would, during the period of his Imamate, manifest himself before the world as Hazrat Ali, the first Imam. On the day of his zahurat (manifestation), Aly Khan would wear an all-white Arab dress and ride the legendary white horse Duldul. In his right hand would be Zulfiqar, the undefeated sword of Mawla Ali (ra). To support their speculation, our teachers would quote a Ginan in Gujrati:

Aly S. Khan continued such trips until even March 1957 to Lourenço Marques, Mozambique and the other one around the same time when he visited Nagpur, India. There too, Aly S. Khan was accepted and honored as the next Imam by the entire Ismaili community worldwide as he substituted for his father as the Imam in many ceremonies. Little did Aly S. Khan, or anyone else know that his father had signed his official will on 25th May 1955 in which he would unprecedentedly skip his son in favor of his grandson as the next Imam of the Nizari Ismailis. This heart-breaking news for Aly S. Khan would only be revealed upon Sultan Muhammad Aga Khan’s death, when his will was read by his solicitor. The next imam was not yet designated at the time the will was being read and it was expected that Sultan Muhammad, Aga Khan III, would designate his son Aly S. Khan  as the next Imam. However, to the surprise of many, the last will of Aga Khan III appointed his grandson, instead of his son as Imam.

4. Contradiction in Aga Khan III’s Will

Interestingly, there were obvious contradictions in the will which the Aga Khan III signed off on. In this document (p. 6), Aga Khan stated:

…notwithstanding that under the Shia Moslem Law the issue of a son is not an heir if there be a son alive….

In other words under Shi’ah law, Karim, the grandson, could not be designated as an heir to the throne of Imamate as long as Karim’s father or uncle was alive. However, on 12 July 1957, the above-mentioned will of Aga Khan III was read in his villa in Geneva. It stated (p. 6):

I APPOINT my grandson KARIM, the son of my son ALY SALOMONE KHAN to succeed the title of AGA KHAN and to be the Imam and Pir of all my Shia Ismailian followers….

By his signature on the will document, the “all comprehensible” Imam had reversed his pronounced decree of

wali-ahad, broken the admitted Shi’iah law of designation and shattered the dreams of Ismailis who were expecting Aly Khan to manifest as Hazrat Ali riding on Duldul with the sword zulfiqar in his hand. Consequently, Aly S. Khan became the spiritual child of his own son, Karim al-Husayni, Aga Khan IV (commonly known as Karim Aga Khan). Biographer Willi Frischauer records in The Aga Khans (p. 210):

Bettina …wrote: ‘To Aly it seemed that his father’s preference for his son was a kind of public humiliation for him… He was never quite the same from that day on. His deep sadness took cover beneath a life of still more inhuman activity.’

…In Bettina’s words — which might well reflect Aly’s feelings at the time — Karim was now the spiritual father of his own father.

5. Ismailis’ Rejection of, and Revolt Against Karim Aga Khan

A majority of the Syrian Ismailis and a few Khojah Ismailis of Punjab revolted at this unprecedented designation. They refused to recognize the appointment of a grandson as their Imam. The group acknowledged Aly Khan as their forty-ninth Imam.

To avoid a possible split in the community, Aly Khan went to Syria, met the leaders of the revolting Ismailis, and explained that his father had chosen his son Karim as the next Imam. In Karachi, the leaders of the group gathered outside the residence of Amir Ali Fancy, President of the Federal Council for Pakistan, and began shouting “Shah Aly Khan Hazar Imam Zindabad“, meaning “Long live the majestic Aly Khan, the present Imam.”

Aly Khan met the leaders of the group and assured them that he too had accepted his son Karim as the rightful Imam. The revolting Ismailis were left with no other choice but to accept Karim Aga Khan as their forty-ninth Imam. In Ismaili history, Prince Aly will be remembered for his generosity by accepting his humiliation without protest.

6. Was Aly S. Khan Planning to Come Out Clean?

Later on, a story began to circulate among his close associates that the Prince had been talking to few of his trusted friends about making a clean breast and testifying before the Jama’at about “divinity and the divine power of the Ismaili Imams” after his initiation. The news may have reached the ears of the late Aga Khan III, who might have changed his decision about his son.

Aly Khan’s prenuptial affair during April 1935 at the Hotel Ritz in Paris with Mrs. Thomas Loel Guinness, the mother of Karim Aga Khan; his marriage to actress Rita Hayworth; and his friendship with Lise Bourdin Bettina, Juliette Greco, Gene Tierney, Kim Novak and other Hollywood personalities might be some of the social reasons for the change of heart of his father, Aga Khan III.

4 thoughts on “Aga Khan 3.5: How Aly S. Khan Became The Spiritual Child of His Own Son”