Aga Khan-led institutions are operated and managed by anti-Muslim Ismaili and Hindus who have deep prejudice against Islam and Muslims in general. There should be no doubt that what their actions reveal is just the tip of the iceberg and what their hearts conceal is far worse than what their actions and tongues reveal.

“Proud Hindu Indian. Muslims are cancer of society . Remove Muslims not only from India, but from whole planet.”

Here is a picture of the twitter post, which has now been deleted by the Aga Khan Foundation official: 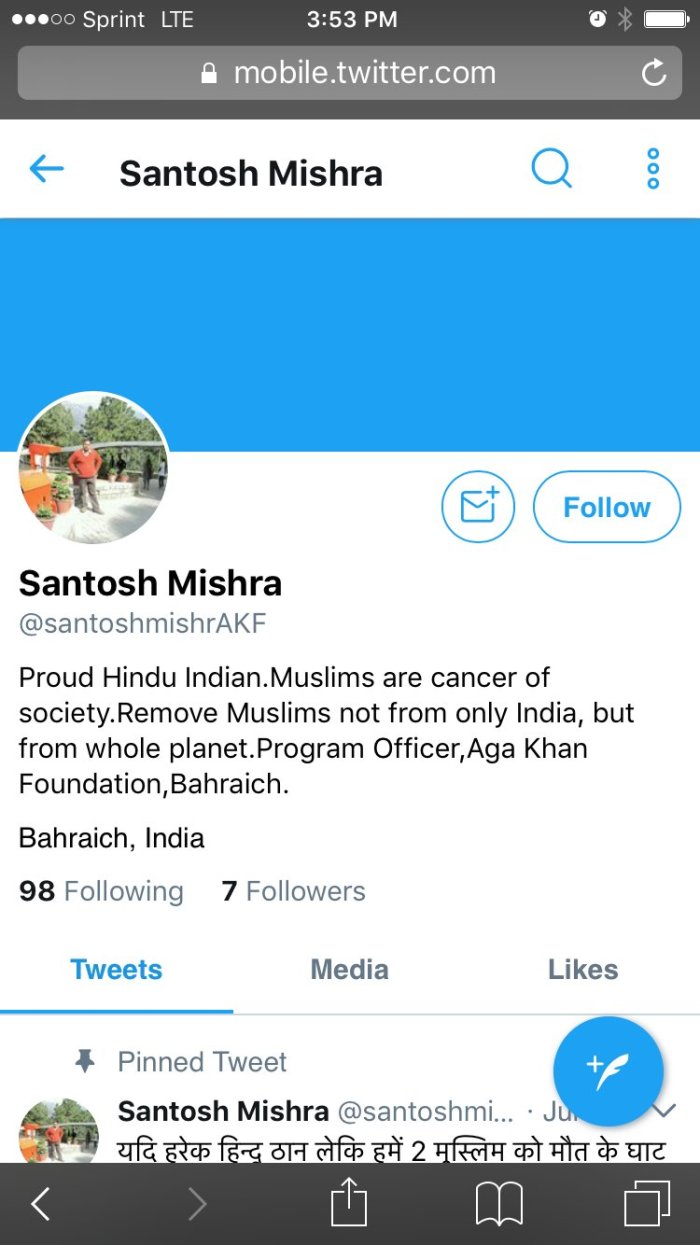 This comes as no surprise to those who have left the shirk-infested practices of Ismailism and have had the courage to expose those dark practices to the massess. The Ismaili community has gone to the extent of killing those individuals, such as the late Akberally Meherally who had to seek intervention of RCMP in Vancouver, BC whereas those like Akber Ghulam Hussain and Ubaid Ullah Chitrali were murdered without their murderers being brought to justice.

Aga Khan Foundation and it’s educational wing, Aga Khan Education Board are also influencing the secular education landscape in Pakistan by undermining the credibility of the existing school boards and bringing in their ‘competing’ educational curriculum which pushes forward the secular agenda of not only separating religion from everyday life’s affairs, but also pushing forward a pluralistic view of religion arguing that all religions lead to salvation regardless of the specific belief system.

Allah (swt) says in the Quran:

“O you who have believed, do not take as intimates those other than yourselves, for they will not spare you [any] ruin. They wish you would have hardship. Hatred has already appeared from their mouths, and what their hearts conceal is greater. We have certainly made clear to you the signs, if you will use reason.” (3:118)

Indeed what their hearts conceal, is far more than what this tweet reveals. Read more: West plans new country for Ismailis