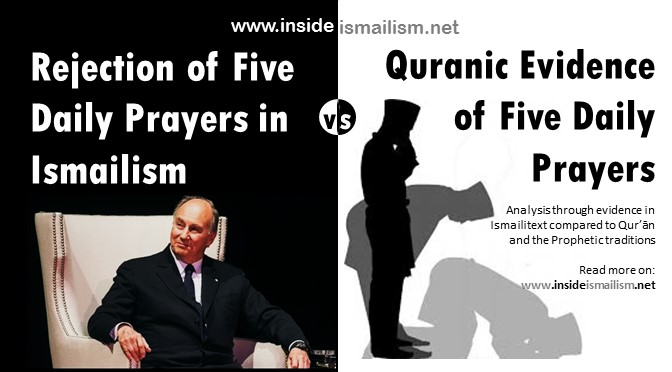 Ismāʿīlīs usually question if the five times prayer is proved by the Qur’ān. In this question, is hidden their rejection of all hadith and all prophetic traditions along with rejection of the method of the prayer. The only prophetic saying which the Ismailis believe in, is that of the hadith of Ghadir-e-Khumm. Other than this hadith, Ismailis even reject all hadith which the Shia believe in. Ismāʿīlīs have no collection of hadith at all. Ismailis also lie that they offer 3 prayers just like the Shia do. The truth is that Shia, just like the Sunni, offer five prayers but the Shia only join the five prayers, into three. The truth about Ismailis is that the ‘prayer’ which they offer is offered regardless of the sunrise and sunset. The ‘prayer’ which the Ismailis offer is nothing like the Shia or Sunni salat.The ‘prayer’ which the Ismāʿīlīs offer is just offered twice a day: once in the morning regardless of the sunrise, and the other two, joined together, conveniently after the 9am-5pm working hours regardless of the sunset time.

1. Evidence of Rejection of Five Times Canonical Prayers in Ismāʿīlīsm

In his book “Ismāʿīlīsm Through the Eyes of the Qur’ān”, author Shawkat Ali Dharshi writes quotes the following verse of the Holy Qur’ān on page 9:

“And establish regular prayers at the two ends of the day and at the approach of the night; for good things remove those that are evil.” Qurʾān 11:114

As commentary for the above, Shawkat Ali Dharshi explains:

“Accordingly, we Ismailis say our Duʿāʾ three times a day. This is mentioned in the Qurʾān in several places. “…. and celebrate the praises of thy lord in the evening and in the morning” (40:55). “Remember thy lord much, and praise (Him) in the early hours of the night and morning.”(3:41). “And glorify Him morning and evening” (33:42) “So glory be to God when you enter the night and when you enter the morning.” (30:17).

Praying five times a day is not mentioned in the Qurʾān. In his translation of the Qur’an, Mir Ahmed Ali, while referring to another commentator, writes as follows:

“If the commentator, wants such minute details in the holy Qur’an, what would he say for the absence of the mention of the details of the prescribed daily ṣalāt in the Holy Qur’an…”

Therefore, according to Shawkat Dharshi, there is no mention in the Qurʾān of ṣalāt az-ẓuhr and ṣalāt al-ʿaṣr.

This is also the view adopted by many missionaries of the Ismāʿīlī Tariqa Board. Here in all these verses of the Qurʾān referred to by Mr. Shawkat Ali Dharshi viz. 40:55; 3:41; 33:42 & 30:17 contain the word sabih which stands for ṣalāt, also the original word ṣalāt (plural ṣalawāt) stands for the five daily prayers in the Qurʾān.

Herein the author in his book claims that there is no mention of the five times prayer in the Qurʾān. He claims that these prayers are three only viz. in Islamic terms fajr, maġrib and ʿišāʾ, though Ismāʿīlīs do not call them by the names of ṣalāt al-faǧr, ṣalāt al-maġrib and ṣalāt al-ʿišāʾ and instead name them as subuh ji duʿāʾ, sanji ji duʿāʾ, and somni ji duʿāʾ.

2. Evidence of Five Prayers in the Qur’ān

A summary of the Qur’ānic evidence of the five daily prayers, supplemented with references from both Sunni and Shia collection of hadith, is below:

Reference from Quran and Shia and Sunni hadith collections on the 5 prayers.

Moving forward with providing additional references, I would first like to quote Abu Inshaa Qari Khalil al-Rahman from his book “Ṣalāt un-Nabi Kay Haseen Manazir”, meaning Beautiful Scenes of the Prayers of the Prophet (pbuh) on page 178 he writes under the heading: “Mention of Five Times Ṣalāt in the Qur’ān”:

“It is a universally accepted fact that the five times ṣalāt, and the method of ṣalāt which was the practice of the Prophet, his companions, the righteously guided caliphs of Islam. And all the generations following were and are offering five times ṣalāt, moreover, at the al-Kaʿbah and al-Masjid an-Nabawī in Madina Munawwara, all the five obligatory prayers have been offered without any break for more than 14 centuries. In spite of this established fact, those who have diseased mind, are trying to misguide the unwary Muslims by false statement that there is no mention of Five Times Ṣalāt in the Qurʾān. They further say that in the Qurʾān there is the mention of the Ṣalāt only for three times. Hereunder we provide the proofs from the Qurʾān. I pray for this mentally perverted and diseased person for the Shifa-e Kamila and Aajila.”

He quotes from the Qurʾān:

“And establish regular prayers at the two ends of the day and at the approach of the night; for good things remove those that are evil.” Surah Hūd, Chapter 11, Verse 114

“Bear then with patience, all that they say, and celebrate the praises of thy Lord, before the rising of the sun and before its setting.” Surah Qāf, Chapter 50, Verse 39

The words indicating before the setting of the sun clearly stand for ṣalāt al-ʿaṣr.

“So glory be to Allah, when you reach evening and when you rise in the morning; To Him be praise in the heavens and on the earth; and in the late afternoon and the day begins to decline.” Surah ar-Rūm 30:17-18

Abdullah Yusuf Ali writes under the commentary of this verse:

The special times for Allah’s remembrance are so described as to include all our activities in life: when we rise in the morning, and when we go to rest in the evening; when we are in the midst of our work, at the decline of the sun, and in the late afternoon. It may be noted that there are all striking stages in the passage of the sun through out terrestrial day, as well as stages in our daily working lives. On this are based the hours of the five canonical prayers, viz.:

2. When the day begins to decline just afternoon (ṣalāt az-ẓuhr).

3. In the late afternoon, say midway between noon and sunset (ṣalāt al-ʿaṣr);

4. and 5. The two evening prayers, one just after sunset (ṣalāt al-maġrib) and the other after twilight has all faded from the horizon, the hour indicated for rest and sleep (ṣalāt al-ʿišāʾ).

Besides other prayers here is mention of the time just after decline of the sun and in the afternoon means ṣalāt aẓ-ẓuhr and ṣalāt al-ʿaṣr. These Prayers are in total all the five prayers in the Qurʾān.

Now I am quoting a few other verses from the Qurʾān:

“Therefore be patient with what they say, and celebrate the praise of thy Lord before the rising of the sun. And before its setting; you celebrate them for part of the hours of the night, and at sides of the day, thou may be pleased.” Surah Ţāhā 20:130

Now the prayer before sunrise is clearly ṣalāt al-faǧr; that before sunset is ṣalāt al-ʿaṣr, the part of the night will indicate ‎ ṣalāt al-maġrib (early night, just after sunset) and ṣalāt al-ʿišāʾ, before going to bed.

“Guard strictly your prayers. Especially the middle prayer, and stand before Allah in a devout frame.” Al-Qur’ān, al-Baqarah 2:238

(a) Here there is command of Allah to stand in the prayer. This means that, the Duʿāʾ which Ismāʿīlīs offer while in sitting position is not in accordance to the instruction of Allāh and practice of the Prophet Muhammad (pbuh). This is simply disobedience to Allāh and the Prophet (pbuh).

(b) This prayer is that of afternoon. Most of the commentators are in favor in interpreting this prayer as the mid-afternoon ṣalāt al-ʿaṣr. This is also born out of the context of revelation of the verse which is that during the Battle of the Trench (Ghazwah al-Khandaq), the fighting was very intense. During this situation there was no time for Asr Namaz and Prophet and the Sahaba could not offer the same. At this juncture this verse was revealed.\

Here is the command for the five daily canonical prayers, viz. four from the declination of the sun from the zenith to the fullest darkness of the night, and the early morning prays are: viz. Zuhar, immediately after the sun begins to decline in the afternoon; Asr in the late afternoon; Magrib immediately after sunset; and Isha, after the glow of the sunset has disappeared and the full darkness of the night has set in.

We offer Ṣalāt only because of the fact that it is so ordained in the Qurʾān by Allah. No other person or authority can amend this command of Allah.

Amongst Ismāʿīlīs there used to be a practice of five times ṣalāt. Here I quote a reference on page 94 under Kalaam 163 of the book Kalaam-e-Mowla published by Ismailia Association for Pakistan:

Above in Urdu version of Kalaam-e-Mowla, published by Ismailia Association for Pakistan, Karachi, indicate in clear terms that the canonical ṣalāt are for five times a day.

Below is one more reference from the book Namaz published by Ismailia Association for Pakistan, Karachi. Here the table of five times salat is provided with reference to the fard, sunnah and nafl prayers. 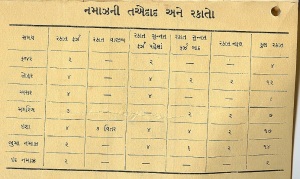 Below is yet another reference from the book written by none other than the 48th Ismāʿīlī Imām Sultan Muhammad Shah Aga Khan III, titled “Khoja Komna Ketlak Mool Tattwo Tatha Kriya Sambath Nanu Pustak”. This book was published in Hijri year 1313 which is about 110 years ago. There is also the khojki script version. Here in it is clearly indicated that the namaz is for five times. This book is originally in Gujrati and the Khojki Script version is also published.

The modern-day Ismāʿīlīs do not even observe three prayers as they publicly claim. The testimony to this fact is that in summer in North America when the timings for sunset reach up to 10 p.m. in locations such as Calgary and Edmonton, Ismāʿīlīs continue to offer their evening duʿāʾ (which they claim is equivalent to ṣalāt al-maġrib and ṣalāt al-ʿišāʾ), at 6:00 p.m. which is five hours before the sunset.

Similarly, in winter when the sunrise timings in North America reach upto 7am in the morning, Ismāʿīlīs continue to offer their morning prayer at 5:30am which is well before the time of the Muslim ṣalāt al-faǧr.

Interestingly, in an interview published on the occasion of him marrying his first wife Sarah Frances Croker-Poole, Aga Khan IV claimed as follows:

“Wherever I am, with Moslems or Christians, I say my prayers five times a day.” – Karim Aga Khan

A sharp contrast indeed to what he preaches his community. The above was published in the Sunday Press, Binghamton N.Y., on October 26, 1969. It was never questioned, challenged or revoked by Aga Khan. Many people also wonder if the statement he made was ever actually practiced by him. Here is a scan of the complete newspaper page which contains the full interview: Not only do Ismāʿīlīs reject the five daily prayers in Qur’ān and publicly claim to offer three prayers, in reality they even reject the Qur’ānic commandment to observe sunrise and sunset prayers. Their belief of rejecting prayer, coupled with rejection of all Islamic commandments such as fasting, hajj and zakat originates from their centuries-old belief that their name-less Imam, who is just called as Ala Zikrihis Salam which literally means “Peace be upon his name” abrogated all Islamic law at the fort of Alamut. For further details, see our paper titled “Who was Imam Ala Zikrihis Salam?” on the Inside Ismailism blog.