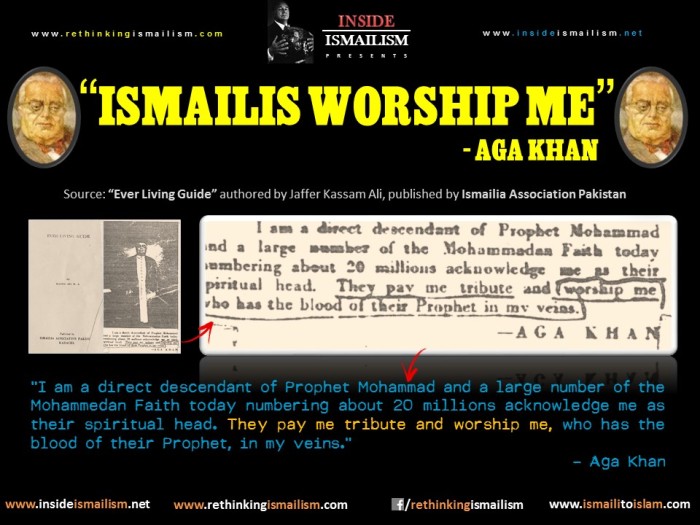 One of the most stunning discoveries which have been made through our dive into the banished 20th century Ismaili texts, is the claim of Aga Khan III himself where he claimed that Ismailis worship him. This statement was previously shunned away as being ‘cooked up’ by the Western gossip press, but now, one of the books published by none other than the Ismailia Association of Pakistan. The book is titled “Ever Living Guide” and is authored by Jaffer Kassim Ali. 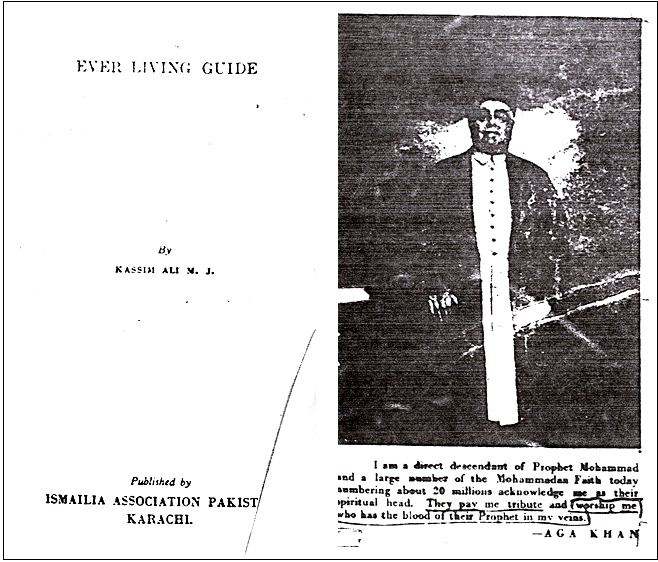 “I am a direct descendant of Prophet Mohammad and a large number of the Mohammedan Faith today numbering about 20 millions acknowledge me as their spiritual head. They pay me tribute and worship me, who has the blood of their Prophet, in my veins.”

What a clear blasphemy of the monotheism which Islam teaches us. Allah (swt) reveals in Surah al-Baqara, Chapter 2, Verses 163 to 167 as follows:

“And your Allah is one Allah, there is no Allah but He. He Is the beneficent the merciful.”

“In the creation of the heaven and the earth, and the alternation of night and day, and ships that run in the sea with that which profits men, and the water that Allah sends down from the sky, then gives life therewith to the earth after its death and spreads in it all (kinds of) animals, and changing of the winds and clouds made subservient between sky and the earth, there are surely signs for people who understand.”

“Yet there are some men who take for themselves objects of worship besides Allah, whom they love as they should love Allah. And those believe are stronger in their love for Allah. And O for the wrong doers had seen, when they see the chastisement that the power is wholly Allah’s, and that Allah is sever in chastisement.”

“When those who were followed renounce those who followed (them)and they see the chastisement and their ties cut as under.”

“And those who followed will say: if we could but return, we would renounce them as they renounced us. Thus will Allah show them their deeds to the intense regret to them, and they will not escape from the Fire.”

The true Islamic shahadah means no one is worthy of worship except Allah. In fact, this statement negates the existence of any other deity besides Allah I and confirms that Allah is the only True God worthy of being worshiped.

Allah is the only one who deserves to be worshipped. It is He alone whom human hearts must worship with utmost love, glorification, humility and fear, and He alone should be relied upon and invoked. No one should be called upon, sought for help or relied upon except Allah. Prayers and sacrifices must be offered to Him alone, and He ought to be worshipped in all sincerity, as the Qur’an states, “They were only ordered to worship Allah, keeping religion pure for Him.” (Soorat Al-Bayyinah, 98:5)

Those who sincerely worship Allah, following the dictates of the testimony of faith, will certainly lead a happy life, for it is only by worshipping Allah alone that hearts find peace and real satisfaction, as the Qur’an states, “Whoever does good, whether male or female, and he is a believer., We will most certainly make him live a happy life.” (Soorat An-Nahl, 16:97)