>
you're reading...
7. Aga Khan and Ismailism in the Media

Text verbatim from the following sources will be reproduced here:

The following is text verbatim from TIME Magazine: 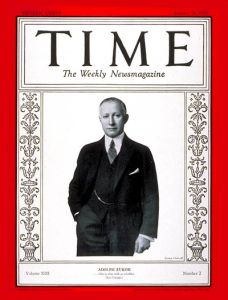 Whenever a bath is taken by His Highness the Aga Khan, the bathwater is carefully preserved, bottled and shipped to Mohammedan communities throughout the world. Thus the faithful are provided with a priceless boon. Holy Water in which a descendant of Prophet Mohammed has laved himself. No niggard, the Aga Khan charges for the really enormous quantity of water in which he bathes each year, only his weight in gold. The ceremony of weighing His Highness takes place each twelvemonth at Aga Hall, Bombay; and then and there the golden wage is payed by representatives of the various Mohammedan sects. No fool, the Aga Khan keeps fat. Also he is at pleasure to stand in with the British Government, which pays him privily a fat subsidy for his good offices among the Mohammedan subjects of George V, and with British masses who bet heavily on many an Aga Khan horse.

Last week at Delhi, the splendrous new Capital of British India, it was His Highness the Aga Khan who presided as Chairman of the All Indian Mohammedan Conference (TIME, Jan. 7). On the agenda was a momentous question. Should the assembled Mohammedans endorse the demand that India be given ”Dominion Status” within a year, which was voiced last fortnight in Calcutta by the Indian National Congress, a gathering not of Mohammedans but of Hindus. When the matter had been thoroughly thrashed out and winnowed, last week, the Aga Khan deftly guided the Mohammedan Conference into adopting a resolution which absolutely ignored the Hindu demand upon Great Britain for ”Dominion Status.” voicing instead merely the desire that Mohammedans should be accorded greater representation in the present native Assembly of the Government of India.

Since it is the virile Mohammedans and not the lackadaisical, jabbering Hindus who might be expected to strike a blow for “Dominion Status,” the service of His Highness the Aga Khan to Britain, last week, was worth incalculably more than even the fat Khan’s great weight in gold.

The complete article and be viewed on the TIME Magazine website URL above.

Aga Khan III being pushed on a wheelchair. Image courtesy of Getty Images.

My father is now Provincial Commissioner of Nyanza Province, and is himself to be the host of the important person. My two older sisters, an enterprising eight and six years old, are on the scene. And the guest is the late Aga Khan, who is coming to stay. To my parents the Aga Khan was a politically important and a socially charming man. But to the large population of Ismaili Moslems in Kisumu he was sacred, a descendant of the Prophet. They gathered in silent reverent multitudes outside our garden, and waited, day and night, for only a glimpse of him. If he called on the faithful to give in a worthy cause, they were ready to balance his weight in gold and in diamonds.

My sisters, Anthea and Eleanor, found themselves on terms of domestic familiarity with this god, and saw the chance of capitalizing. Anthea, particularly, at eight, had a sound commercial instinct. She decided to take up the profession of Chaucer’s Pardoner, and go into business selling relics. Wouldn’t a good Moslem give good money for the Aga Khan’s nail clippings, for instance? The nail clippings weren’t available, but what about his bath water? Surely selling bathwater to the faithful would be a good commercial proposition.

In the rather primitive plumbing arrangements we had, there was a little pipe that squirted the released bath water into an open drain. Here my sisters squatted when the evening came, with a fine collection of jam jars and tin cans, awaiting the happy moment when the Aga Khan should pull out his reverend plug, and a golden river would come gurgling into their receptacles. (My sisters must have been early practitioners of what Ronald Reagan nowadays calls “the trickle-down theory of wealth”!)

Well, they never realized their dreams of riches. My mother, the spoilsport, caught them in the midst of their pots and jars, and emptied them all. So we never did ascertain the market value of a bottle of Aga Khan bathwater.

The above two sources confirm what Mihir Bose wrote in the introduction to his famous book, The Aga Khans:

In 1967 a young man, just turning thirty, visited a small Asian community in Iringa in Tanzania. The young man had a most curious background: his mother was English, his father half Italian and he himself was one of the richest men in the world. He had arrived in Iringa, and is small community of 800-odd Asians, as part of his religious duties, Irina is one of those Tanzanian places which nobody has ever heard of, and no celebrity ever visits. But this young man’s visit was so important that a special extension was built onto the house in which he was to live. This was fitted out in what the locals called ‘the Western style’, meaning a bathroom with a proper toilet and a bath tub. Some time during this stay in Iringa the young man had a bath in the bath tub. This would hardly be worth mentioning except that long after the young man had left Iringa, the water that he had used for his bath was saved, and bottled. The Asian community in Iringa believed that young man was God and they were happy to buy bottles of the young man’s bath water and preserve it in their homes as a sure mark of their God.

That young man is now rather older. On 13th December 1983 he celebrated his forth-seventh birthday. Though still good looking, he is now a man with years of hard work behind him, who dresses unostentatiously – only a single right, a gold watch and cuff links – and meticulously tailored suits that disguised his stoutness although not his baldness, or his enjoyment of juvenile pranks.

He is, to give him his full title, Prince Karim El Husseni, Aga Khan IV, the 49th hereditary Imam of the Ismaili Muslims of the world, and claiming direct descent from the prophet Mohammed. His Ismaili followers are mainly Asians, spread through the Indian subcontinent, parts of the East Africa, and now in Canada and in Britain. it is difficult to estimate how many Ismaili Muslims there are and though there have been reports that there are as many as twenty-two million, it is possible that the worldwide following of the Aga numbers no more than about four or five million. The Aga’s own highly geared publicity never actually estimates how many Ismaili Muslims there are throughout the world, but suggest that there are probably over ten thousand in Britain. These are mostly refugees from Amin’s Uganda, including some spectacularly successful businessmen who form part of the rich Asian community developing in this country.

Giving out free #LessonsInIsmailism
View all posts by akbarkhoja »
« Pluralism Without Islam: Global Center for Pluralism
Aga Khan sold his Bathwater at a ‘High Price’ »

2 thoughts on “How Holy is Aga Khan’s Bath Water?”